Overheating risks are increasing across Canada as the climate warms. Read on to learn more about a non-profit housing provider’s journey to ensuring its buildings are climate- ready, and the importance of incorporating future climate data into building design as early as possible.

Climate change impacts in the public imagination tend to be “spectaculars” such as sea-level rise, wildfires, and extreme weather events. But there is much less awareness of how bad overheating can be for your health, especially in a northern climate like Canada’s. Yet in 2018, a heat wave caused 86 heat-related excess deaths in Quebec, while approximately 100 excess deaths were recorded during an unusually hot week in Vancouver in 2009.1

Air conditioning and other forms of cooling are commonplace in many parts of Ontario and Quebec. However, over much of southern British Columbia and Atlantic Canada, mechanical cooling hasn’t been necessary historically. It surprises many to learn that such cooling is already necessary in these regions, given the warming that has occurred in recent decades. This demonstrates how climate change can not only intensify existing issues, but can also create entirely new types of challenges.

Even aside from record temperatures and heat waves, the climate change-driven increase in the number of days per year that are sufficiently hot to require some form of cooling is already having an impact on public health. A recent study by Toronto Public Health found that mortality risks begin to increase when temperatures climb above 26ºC.2 These temperatures would have been rare in southern BC 50 years ago, but now occur every year, particularly in the large urban centres. ClimateData.ca can assist in the identification of such key temperature thresholds and where they are most likely to occur.

“In Canada, this, you know, northern country, we have a tendency to play down the importance of taking action when the weather is hot. For most people, it’s kind of like, ‘Oh, it’s hot’, and that’s it,” says Magda Szpala, Director of Sustainability and Resiliency at BC Housing, the public agency responsible for building and managing social housing in the western province.

“There’s all this damage with something like flooding. It’s very visible. Lots of property damage. But people in Canada usually don’t die from flooding. Most Canadians don’t realize that more people die from overheating than from any other natural disaster.”

She calls overheating the silent killer because of the lack of attention it attracts. But it’s become the main focus of climate risk for the agency. The province has introduced what it calls a “Step Code,” which allows local governments to require additional levels of energy efficiency in new construction that go beyond the province’s established Building Code. A building will, for example, have a certain energy budget that needs to be adhered to. To figure out if a new building complies with this budget, anyone planning construction has to use energy modelling software followed by on-site testing.

BC Housing supports some 110,000 households, including low-income, seniors, people with disabilities, and the homeless. The corporation is the largest provider of non-profit housing in the province, which in turn means that the modelling needed to ensure their buildings are climate-ready and in line with the Step Code is a vast undertaking. 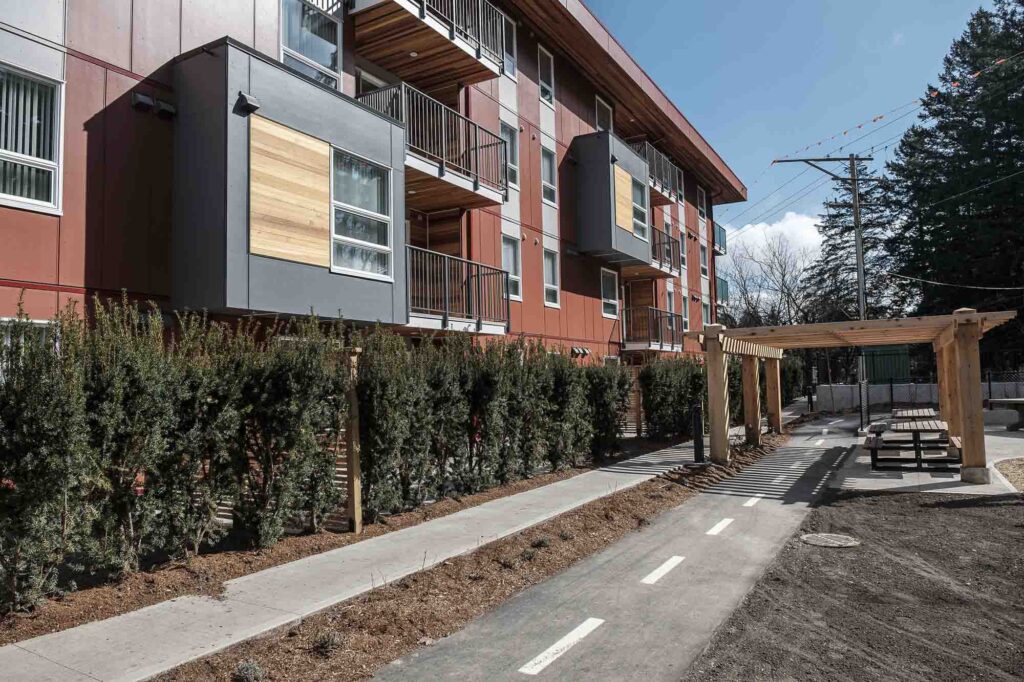 “The danger here is only looking at data describing what the climate was like for a particular region in the past, which might show very little overheating risk,” adds Szpala’s colleague, Wilma Leung, Senior Manager at the BC Housing Research Centre (which leads research and education to support a strong residential construction industry and housing sector). “But the future climate will not be like the past.”

If future climate is not considered, a building might be constructed with adequate heating for the winter, but no cooling provision in the summer. At first glance, this makes sense. While over 90 percent of households have some form of air conditioning in countries like the US and Japan, only about 60 percent in Canada do, according to Statistics Canada. In British Columbia, only one-third of households have air conditioning, and this drops to under a quarter in the Atlantic provinces.

Visitors to ClimateData.ca can use the site to identify the future frequency of extreme heat events. For example, users can see that in climate modelling of the Greater Vancouver region in the recent past, there were zero “tropical nights” (the term used to describe nights where the minimum temperature exceeds 18ºC). Yet users can also see that by the 2050s there could be as many as 10 such nights a year on average, and in the more distant future under all global warming scenarios, the number of these nights increases further (Figure 1). This is significant, as exceedances of maximum and minimum temperature thresholds over prolonged time periods (i.e. heat waves) result in higher mortality risks. Depending on the region, a hot summer night typically ranges from 16-20ºC – three consecutive days with nighttime temperatures beyond these thresholds contribute to increased risk. The Vancouver region has previously been able to rely on cool nights to provide relief from hot days; in the absence of mechanical cooling methods, a string of hot nights will prevent passive cooling via window ventilation and exacerbate heat stress.

Figure 1. Changes to Tropical Nights over the 21st Century for the Greater Vancouver Region

Annual number of tropical nights simulated over the 21st century by an ensemble of global climate models. Different colours refer to different future emissions pathways (RCPs), with heavy lines showing the model median and lighter shading indicating the model range. A period centred on the year 2057 is highlighted, indicating a possible median of 10 tropical nights under the high emissions scenario (RCP8.5). Figure generated at ClimateData.ca.

This information is important for all developers and housing providers, including an organization like BC Housing, since their buildings will have a certain energy budget prescribed by local governments through the Step Code. As Leung explains, “Without such cooling provisions, in the future, people in those households will just go out and buy an off-the-shelf air-conditioner, stick it in their window, and now your energy budget is blown.”

For this reason, BC Housing developed a series of guidelines to build with this in mind. The organization then reached out to the Pacific Climate Impacts Consortium to calculate future-adjusted versions of location-specific, historical weather files at different periods in the future, using the high emissions scenario (RCP 8.5). Utilizing the high emissions scenario provides the most appropriate range of outputs for design, as the amount of climate change that would occur in the high emissions scenario by about mid-century is similar to what would occur under a mid-range scenario (RCP 4.5) later in the century. These “future weather files” constitute an educated guess of what typical daily temperatures might be at locations that already have historical weather files. BC Housing then used these files as inputs to energy models that simulated building performance under these warmer conditions, both for existing buildings and those currently being designed.

The next step was to conduct a more fine-grained analysis, moving from the entire building’s energy budget and performance to the level of individual units within a building. An individual unit’s overheating risk depends on its orientation and location. One would expect that, for example, a southwest-facing unit might be more exposed to overheating than a unit in the northeast corner of the building.

“I’ve been working in this area for some time, but it was so surprising to find out when we did the energy modelling using future weather files, that a lot of our buildings that we had designed would be at very high risk of overheating the very first summer that the building opens,” says Szpala. “That was a bit of a shock. That was huge.”

Both Leung and Szpala say that if they were to advise other developers, the number one recommendation would be to consider overheating risk as early in the process as possible. At later stages of project development, incorporating climate adaptation measures is likely to be difficult and, consequently, expensive. “We definitely learned the hard way.”

Another key discovery surrounded the problem of building height. A developer will want to maximize the number of units they can fit into a particular space. A private developer wants to sell more units while a public or non-profit developer likewise wants to house as many people as possible. But cooling systems require ducting in corridors and ceilings, taking up significant space that could otherwise be used for a few more units or even an extra floor. This means that municipal zoning laws may have to be altered to allow for greater building heights, for example.

Another consideration is the possibility of “overdesigning” a building for a future climate, given that adaptation measures are sometimes expensive. Depending on future global greenhouse gas emissions and the response of the climate (not to mention major advancements in building design), the measures required to construct a “2080-ready” building today might not be necessary for several decades, or at all. “There is a lot of uncertainty here, and even debates, but without a future weather file, we have nothing to stand on at all,” adds Szpala. 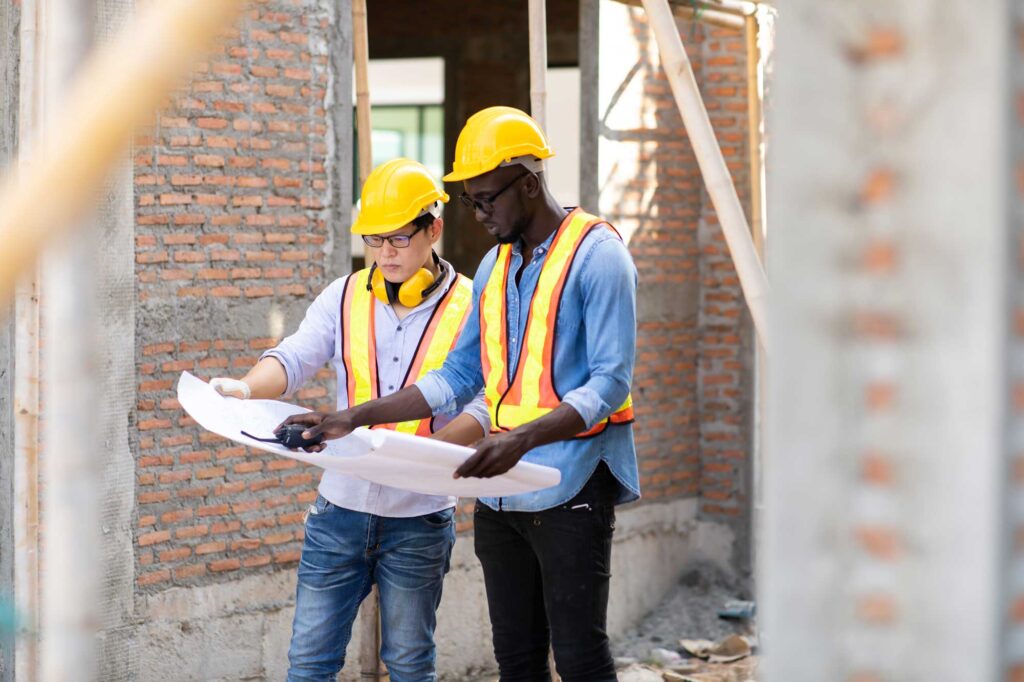 Other lessons learned in recent years surrounded the extended seasons of wildfire in British Columbia and California, and also the Covid-19 pandemic. When cooling options are considered, air quality also comes into play. To cool down, people will want to open a window, but not if smoke from wildfires introduces toxic levels of air pollutants. In this case, air conditioning is a natural choice. However, if the electricity used to power the air conditioning is carbon-intensive, then the emissions that lead to warming will increase as a result.

One cheaper and more energy efficient option is to have a single cooled common room, or refuge centre, rather than air conditioning for every unit. This solution allows for the efficient filtration of allergens and wildfire particulates as well. “But a common room doesn’t work during a pandemic!” says Leung.

“There are layers upon layers of climate resilience. And sometimes, the response to one aspect acts against a response to another aspect,” she continues. “It’s really complicated. Future climate data at least help.” 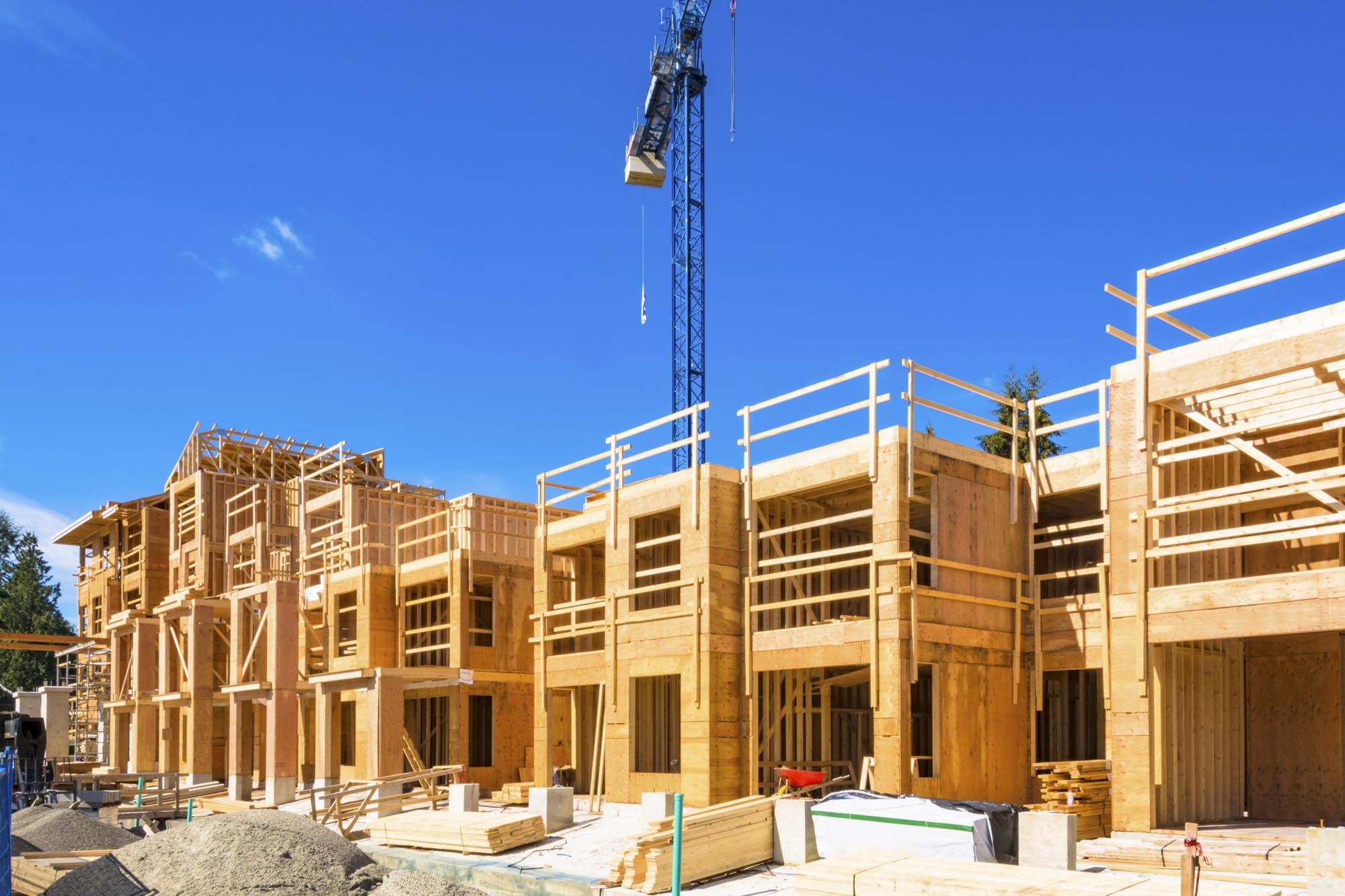 The BC Energy Step Code requires energy modelling for Part 3 and Part 9 buildings, which typically utilizes weather files of historical conditions. However, future-adjusted weather files for locations across BC are now available for energy modelling. They were produced by applying the high emissions scenario (RCP 8.5) to the most recent Canadian Weather Year for Energy Calculation (CWEC) dataset, for each location in that dataset. The files are produced for three different 30-year periods (2020s, 2050s, and 2080s). 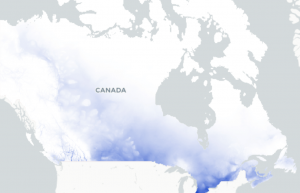 Cooling degree days (CDDs) give an indication of the amount of space cooling, i.e., air conditioning, that may be required to maintain comfortable conditions in a building during warmer months. When the daily average temperature is hotter than the threshold temperature, CDDs are accumulated (see Degree Days Above). Threshold  values may vary, but 18°C is commonly used in Canada.   Larger CDD values indicate a greater need for air conditioning.

The number of degree days accumulated above 18°C in the selected time period. Use the Variable menu option to view the annual, monthly or seasonal values for this index. Visit the Analyze page to calculate degree days using different threshold temperatures. 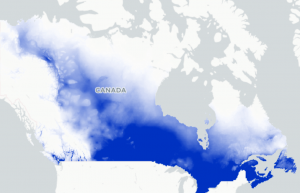 Tropical Nights (Days with Tmin >18°C) describes the number of days where the nighttime low temperature is warmer than 18°C.

Hot summer days and heat waves become particularly stressful if overnight temperatures do not provide cooling relief. Tropical nights make it more difficult for the body to cool down and recover from hot days.

Elderly people, the homeless, and those who live in houses or apartments without air conditioning are especially vulnerable during these heat events, particularly if they last for more than a few days.