Across Canada, engineers who design public infrastructure realised that their projects were vulnerable to climate change and in response they developed, in collaboration with several partners, the PIEVC Protocol to address the impacts of climate variability and change for their transportation infrastructure projects. This case study shares how it was applied in BC.

Once the PIEVC Protocol got off the ground, its users in the British Columbian provincial transportation ministry began to learn how to streamline and speed up the process. Applying the Protocol to a situation where climate change was already having an impact, vulnerability assessments were conducted on multiple stretches of the BC highway system. These assessments indicated that extreme precipitation is the most pressing climate risk impacting this infrastructure.

After the first trial run of the PIEVC Protocol in Manitoba (see Box 1), the chief engineer of the BC Ministry of Transportation and Infrastructure (MoTI), Dirk Nyland, asked for the process to be applied to a situation where they thought climate change might already be having an impact. Dirk was becoming concerned by the number of highway failures caused by extreme weather events, especially in areas where there had historically been few extreme weather-related problems.

Box 1: Development of the PIEVC Protocol

In the mid-2000s, the environmental sustainability committee of Engineers Canada started a partnership with Natural Resources Canada to explore the issue of climate change, in particular the identification of climate risks that could impact public infrastructure. The initiative brought together senior figures from the world of engineering, climate science, insurance, academia, and federal, provincial, and municipal policy: a group that would eventually be called the Public Infrastructure Engineering Vulnerability Committee, or PIEVC, pronounced pie-VC. Over the following decade, the PIEVC would develop a protocol for climate risk assessment that is now widely used across Canada and internationally, for building projects and by public transit managers, provincial government departments, and a raft of other entities.

Today, climate risk assessments using the PIEVC Protocol as a template can acquire much of the necessary climate data by accessing publicly available data from ClimateData.ca, or regional climate services such as Pacific Climate Impacts Consortium (PCIC) and Ouranos. At the time of developing and testing the Protocol however, acquiring this information took up a significant proportion of the costs of the assessment.

The very first real-world trial run of the PIEVC Protocol was performed on a public water works in Portage La Prairie, Manitoba. One of the biggest lessons the group learned was that everyone involved with a piece of infrastructure, regardless of role, has vital information to relay in the vulnerability assessment process. Initially, they had been speaking just to the designers and managers. But they quickly realized the importance of having everyone in the room, including operations and maintenance staff, to assess potential hazards. This co-evaluation process is an important part of the Protocol. A simple slogan they adopted commanded that: “Everyone who has a hand on it, has to have a say about it.” All of these diverse perspectives have different risk tolerances, and the aim should be to understand the combined risk tolerance of the organization, not just that of a particular individual or particular job type within it. The Protocol processes were revised to reflect these lessons.

The first location in BC selected for a PIEVC assessment was the Coquihalla Highway, which runs adjacent to the Coquihalla River in mountainous terrain with steep slopes. This assessment included a wide variety of climate variables but it was ultimately concluded that increased precipitation presented the most significant risk due to its impact on drainage management. Other aspects of climate change, such as heat waves or wildfires, did not seem to present significantly increased risks to highway infrastructure in British Columbia (although it was recognized that fire may compound drainage and erosion issues).

The Ministry then applied the PIEVC Protocol to a section of Highway 16 that lies between Vanderhoof and Burns Lake. The Coquihalla investigation provided insights into climate risks to infrastructure in a mountainous, coastal climate, while the Highway 16 investigation offered a look at risks in an interior, plateau environment. As a result of these vulnerability assessments, the MoTI identified evidence that atmospheric river events (a climate phenomenon in which there is a massive, monsoon-like rainfall over a very short time period) have increased in both intensity and frequency, and that such changes are likely to continue.

These assessments also helped Dirk and the MoTI to view the Protocol not just as something to help them deal with future climate change, but as a process to deal with a climate that was already changing. The Protocol could help them determine better design information up front to build better from the get-go.

Further assessments were completed for three different segments of highways throughout the Province, all of which pass through steep mountainous terrain: Highway 20 in the Bella Coola region, Highway 37A in the Stewart region, and Highway 97 in the Pine Pass region. Based on the findings from the Coquihalla and Highway 16 investigations, these assessments were able to focus on a smaller number of important climate parameters, particularly precipitation. These three regions were selected because they had all been affected by extreme precipitation.

To replicate aspects of the PIEVC analysis for these three highway segments, variables can be chosen on ClimateData.ca to see trends in precipitation on select grid cells (Figures 1-3). 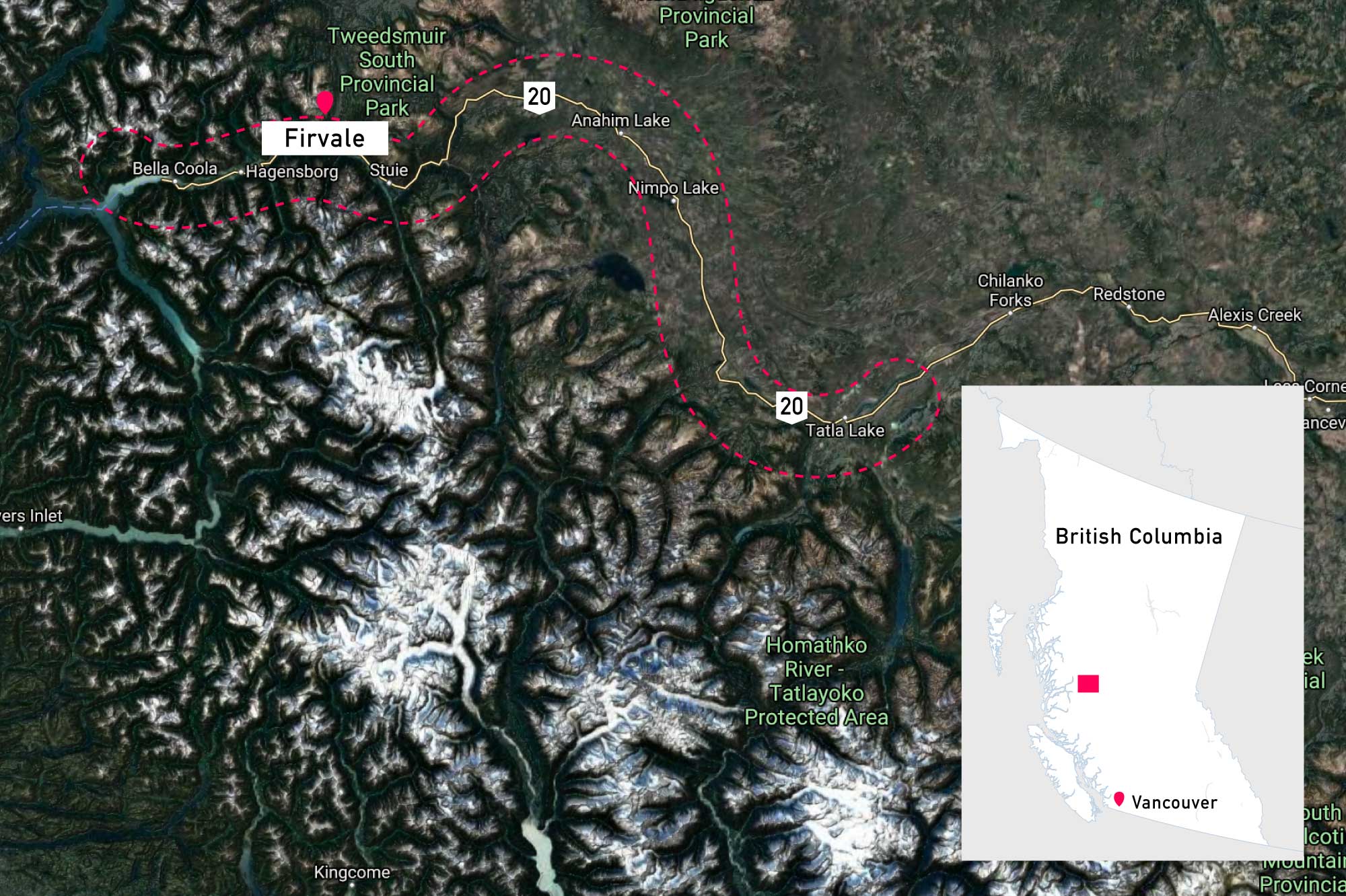 Left: Annual number of days when precipitation exceeds 20mm for the community of Firvale (in the Bella Coola region), located along the segment of Highway 20 analyzed with the PIEVC Protocol. Different colours refer to different future emissions pathways (RCPs), with heavy lines showing the multi-model median and lighter shading indicating the multi-model range. Right: Location of the Highway 20 segment and the community of Firvale, in relation to the province of BC (inset). 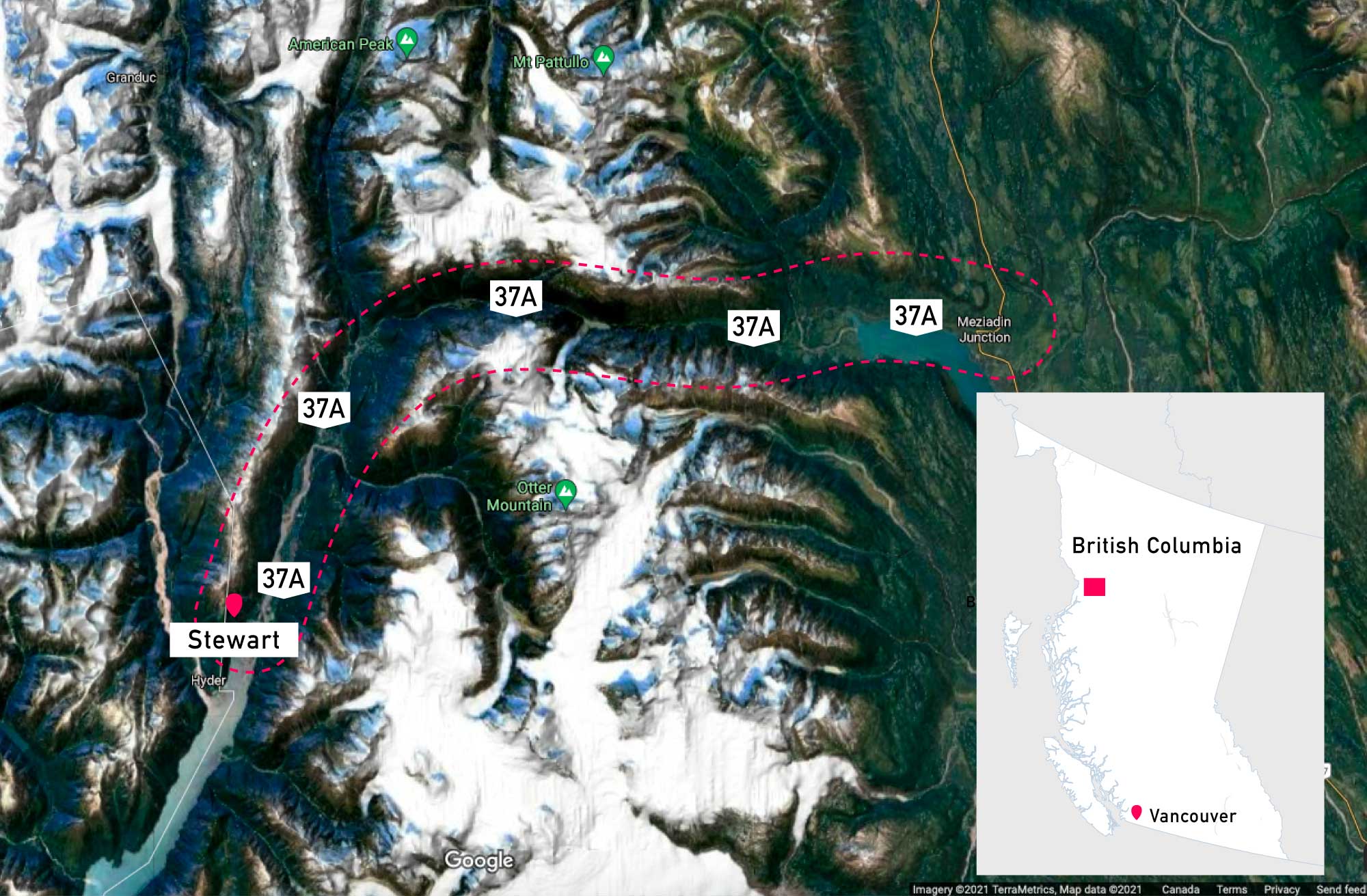 Left: Annual number of days when precipitation exceeds 20mm for the town of Stewart, located along the segment of Highway 37A analyzed with the PIEVC Protocol. Different colours refer to different future emissions pathways (RCPs), with heavy lines showing the multi-model median and lighter shading indicating the multi-model range. Right: Location of the Highway 37A segment and the town of Stewart, in relation to the province of BC (inset). 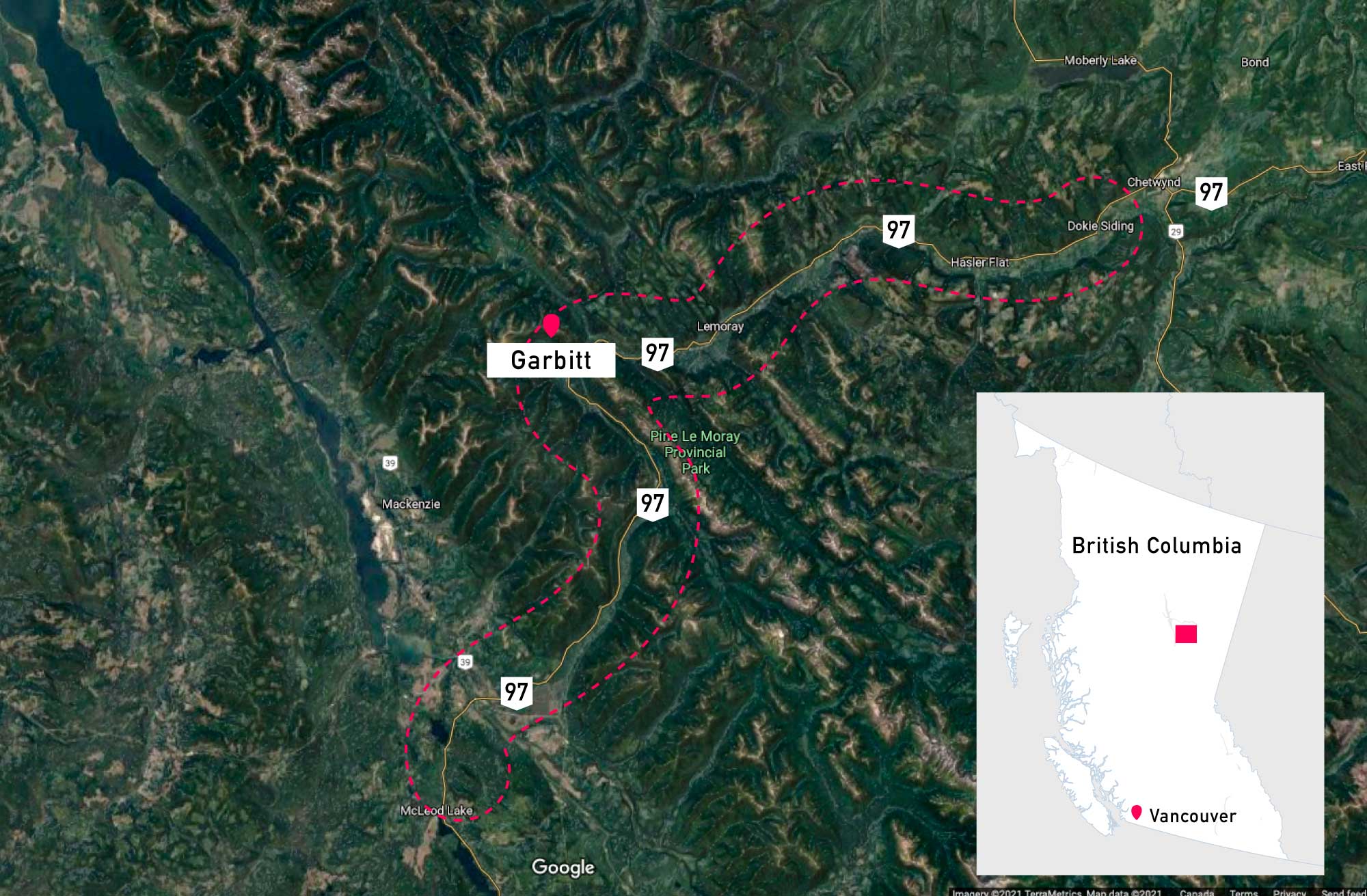 Left: Annual number of days when precipitation exceeds 20mm for Garbitt, BC (in the Pine Pass region), located along the segment of Highway 97 analyzed with the PIEVC Protocol. Different colours refer to different future emissions pathways (RCPs), with heavy lines showing the multi-model median and lighter shading indicating the multi-model range. Right: Location of the Highway 97 segment and Garbitt, in relation to the province of BC (inset).

As can be seen in Figures 1-3, the number of days with high rainfall (which can be seen by analyzing the variable Wet Days > 20 mm) will increase through the century for each location, especially when considering the high emissions (RCP 8.5) scenario. As extreme weather events have historically proven problematic for these three road sections, and natural variability will continue in a changing climate, an upward trend of average precipitation in these areas and the increasing number of days with high precipitation indicates extreme precipitation will likely be more of a problem over the coming decades.

While much of the province’s existing highway infrastructure has yet to undergo the PIEVC Protocol process, an important outcome of these assessments is that any renewal of such infrastructure must now take climate into account (see Box 2). If some infrastructure is damaged by extreme weather, it is no longer replaced like-for-like. Instead, those involved perform what Dirk calls “a quickie” PIEVC Protocol study, based on the streamlined process used for the three-in-one assessment above, to determine how the new infrastructure can be resilient in a changing climate.

The PIEVC Protocol is a multidisciplinary process, and in these cases the project and advisory team members came from a variety of backgrounds, including hydrotechnical, geotechnical, environmental, engineering, and climate science. Dirk thinks that the process has forced them to rethink everything and that this is a good thing. “It’s a two-way thing, a synergy with the climate scientists, everyone who is affected. It’s an ongoing team effort. It’s not just one guy sitting at a drafting table anymore.”

You can find more information on BC government PIEVC assessments, including links to detailed PIEVC assessment reports for the highways discussed in this case study, at the bottom of this page: Adapting Transportation Infrastructure to Climate Change

After implementing the PIEVC Protocol on multiple pieces of highway infrastructure, BC’s Ministry of Transportation and Infrastructure (MoTI) wanted to apply consideration of climate change more broadly. In 2015, the MoTI published a “Technical Circular” that states that any engineering project with the Ministry needs to address climate change. While only a few pages long, this document had a profound impact on the sector. It established the formal requirement that engineers consider climate change impacts on any project for the Ministry, and set an industry standard that has had impacts throughout the engineering community.

The authors would like to express their sincere gratitude to Dirk Nyland, Jim Barnes, and the BC Ministry of Transportation and Infrastructure for their invaluable contributions to this case study.