Lyme disease incidence is increasing in Ontario, particularly in the eastern part of the province. This trend is likely to continue as climate change progresses.

In southern parts of central and eastern Canada, Lyme disease is transmitted to humans through the bite of the blacklegged tick, Ixodes scapularis, the main tick vector of the Lyme-disease-causing bacterium Borrelia burgdorferi (see Box “About Lyme disease”).

There were 1,003 probable and confirmed cases of Lyme disease reported in Ontario in 20173, three times higher than the annual average of 313 from 2012 to 2016. Cases were more frequent between June and August, and among men (60%), leading to 31 hospitalizations but no deaths. Ontario Lyme disease incidence in 2017 was at its highest level since it became a reportable disease in 1998. In 2018, 612 cases were reported in that province4.

The presence of I. scapularis is increasing in eastern Ontario due to various environmental factors conducive to its propagation, such as forest type, microhabitat characteristics, humidity and temperature5.

Among the factors facilitating tick establishment, particularly in high rainfall areas, the most important determinant is the increase in annual cumulative degree days above 0 °C, suggesting that climate warming is associated with the expansion of their geographic range6. Projections suggest that, depending on weather conditions, the speed of range expansion in Canada will vary from 35 to 55 km per year and that the area colonized by I. scapularis could increase from 23,000 km2 in 2010 to 317,000 km2 in 2020. 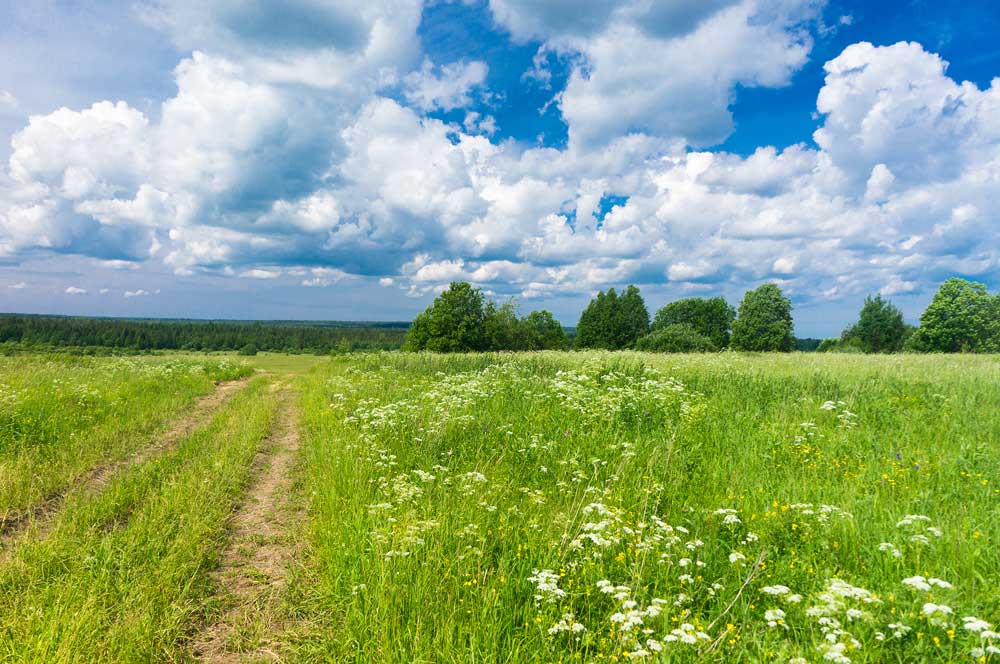 Among the climatic factors favouring the establishment of ticks, the most important is the increase in the number of annual cumulative degree-days above 0°C, a minimum of 2800 degree-days above freezing point being required for tick survival. The figure present this climate indicator estimated from 24 climate models in the BCCAQv2 dataset.

Ontario public health officials analyze Lyme disease risk by reporting all cases of Lyme disease, monitoring I. scapularis in its natural habitat, and keeping the population informed about the risk of infection.

For example, active tick surveillance activities were recently conducted in Ottawa5, Ontario. From June to October 2017, researchers collected tick samples using the drag sampling method in 23 sites including municipal parks, recreational trails and forests within the city of Ottawa. In total, almost 30% of the 239 I. scapularis ticks collected were infected with B. burgdorferi, known to cause Lyme disease.

A two-year study was also carried out in the Dundas area7, in which veterinarians and pet groomers were asked to collect blacklegged ticks from dogs and cats with no history of travel. Additionally, I. scapularis specimens were submitted from local residents and collected by marking. In total, 12 (41%) of the 29 blacklegged ticks collected were infected with B. burgdorferi, confirming the pathogen’s presence in the area.

In addition, Public Health Ontario publishes an updated map (see Figure 2) every year identifying areas where blacklegged ticks are known to occur and where humans have the potential to come into contact with infected ticks. Estimated risk areas are calculated as a 20-km radius from the centre of a location where blacklegged ticks were found.

The purpose of the map is to assist local public health units with Lyme disease case investigations and to help health professionals evaluate the risk of infection among their patients. Public Health Ontario warns users, however, that blacklegged ticks are transported by migratory birds, meaning there is a possibility of encountering an infected blacklegged tick almost anywhere in Ontario.

Each year Public Health Ontario publishes an updated map identifying the zones where the presence of black-legged ticks is known or where people may potentially come into contact with infected ticks. The estimated risk areas are calculated using a radius of 20km from the centre of the location where black-legged ticks were detected. 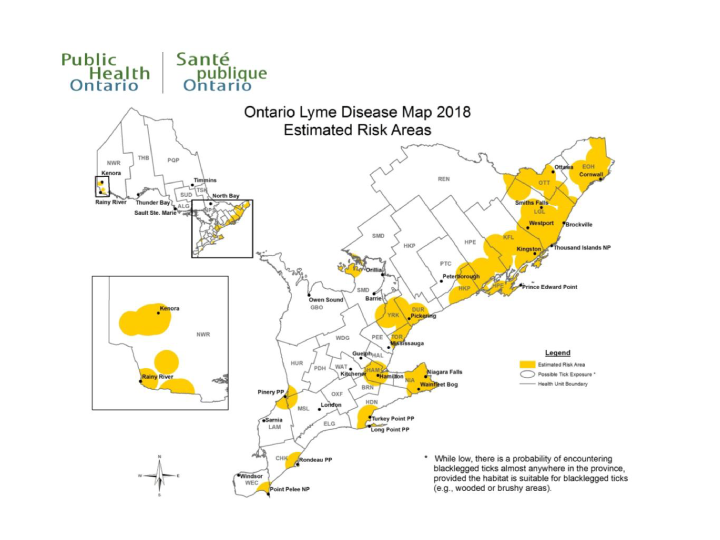 Symptoms of Lyme disease can be different from person to person, and usually start 3 to 30 days after being bitten by an infected blacklegged tick. Most people experience mild flu-like symptoms soon after being bitten, while a small number may have more serious symptoms, sometimes weeks after the bite, such as a rash (sometimes shaped like a bull’s eye), fever, chills, headache, fatigue, muscle and joint aches, and swollen lymph nodes.

In rare cases, Lyme disease can lead to death usually because of complications involving infection of the heart.