Insect development is generally related to temperature. Consequently, climate change may increase crop damage caused by certain insects by influencing the growth of their populations, by allowing certain species to develop an additional generation or to extend their range, or even by reducing their winter mortality.

In recent years, changes in certain plant and animal species have already been observed in connection with variations in temperature and precipitation, which have promoted the dissemination and propagation of several diseases and pests. Some species are disappearing, while others are appearing or expanding their distribution in environments different from their original range. Coupled with the intensification of trade, climate change represents a risk factor in an agricultural context. Thus, in the northern hemisphere, climate change has led several species to extend their range northwards in recent years, which may cause significant changes in the context of crop protection. These species, which are sometimes already damaging to crops, could cause even more damage in the near future.1 The brown marmorated stink bug is one of these invasive alien species that pose a threat to the environment and the economy of a region, country or continent. It has the potential to invade ecosystems other than its original range and to reproduce and colonize them, thus modifying the biodiversity and balance of these ecosystems. It can adapt and establish itself quickly in its new environment. In an agricultural context, it can compete with native species, leading to their decline. In addition, its adaptability can allow it to effectively colonize new territories when its natural enemies are not yet present or have not adapted to the environmental conditions. 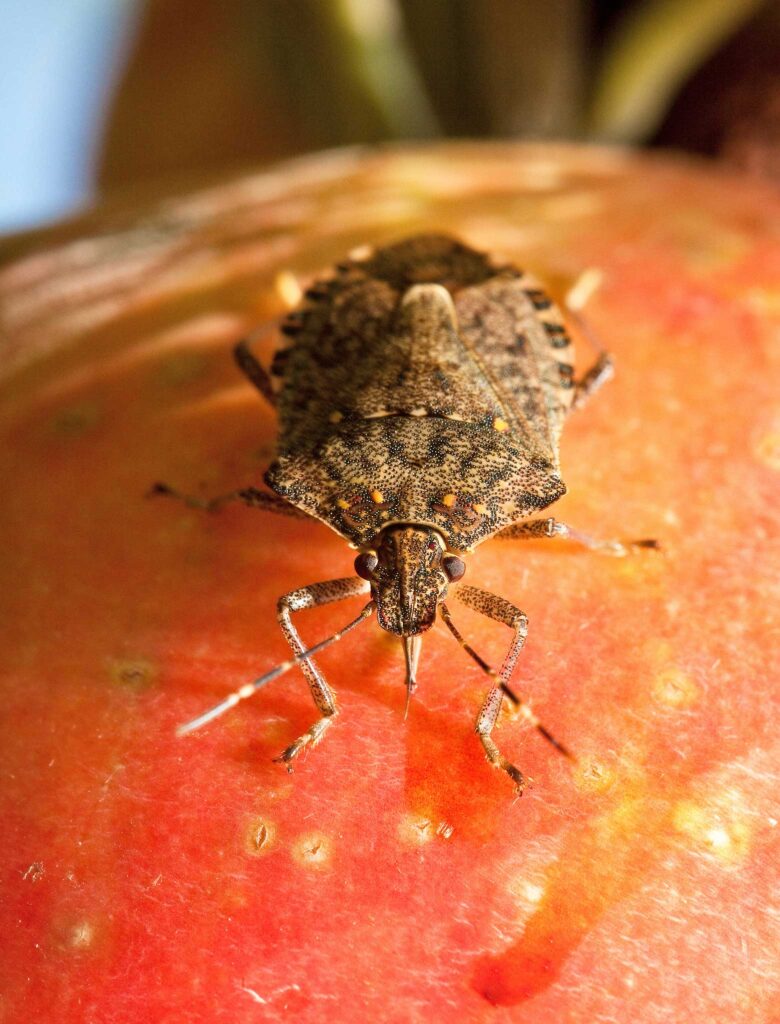 Native to Asia, the brown marmorated stink bug has been accidentally introduced to several continents, including Europe, Oceania and North America. Since its appearance in Pennsylvania in 1996, this bug has rapidly expanded its range; the species is now found in more than 40 U.S. states. In Canada, it is considered to be widely distributed in British Columbia in the Lower Mainland and in the Okanagan region. However, populations appear to be very irregular, though they are abundant in places. In Ontario, this bug has been found on trees or sheds near crops, but no infestation has yet been reported. In Quebec, it was identified for the first time in 2014, first in an orchard in the Franklin region and then in the Montreal region in 2016, where nymphs and adults have been captured every year since then.2 The species is constantly dispersing in North America, facilitated by human movements and trade (transport of contaminated plants, among others). During winter, it takes shelter in litter in fields and orchards. As it also enters houses, it represents a nuisance for residents.1,3

The brown marmorated stink bug attacks many plant species, including soybean, corn, sugar maple and a wide variety of fruits (apples, peaches, berries, citrus, tomatoes, etc.). As spring arrives, the combination of higher temperatures and the lengthening photoperiod promotes the emergence and reactivation of adults, which exit their overwintering sites. In forests, these sites include dead trees, while in urban areas, the brown marmorated stink bug overwinters in homes.

The brown marmorated stink bug is an insect that has several stages of development, from egg to adult through different larval stages (nymphs).

Figure 1: Stages of Development of the Brown Marmorated Stink Bug

To model the development of the brown marmorated stink bug, climate temperature data, combined with field observations and laboratory studies carried out in the U.S., was used to calculate the number of degree days (DD) required for the insect to reach defined stages of development. A model cumulating these DDs from March 1 for a base temperature of 14 °C was adapted from work carried out by Nielsen et al.4 The table below indicates some important stages in the development of the brown marmorated stink bug and the number of DDs to reach them, as predicted by this model. 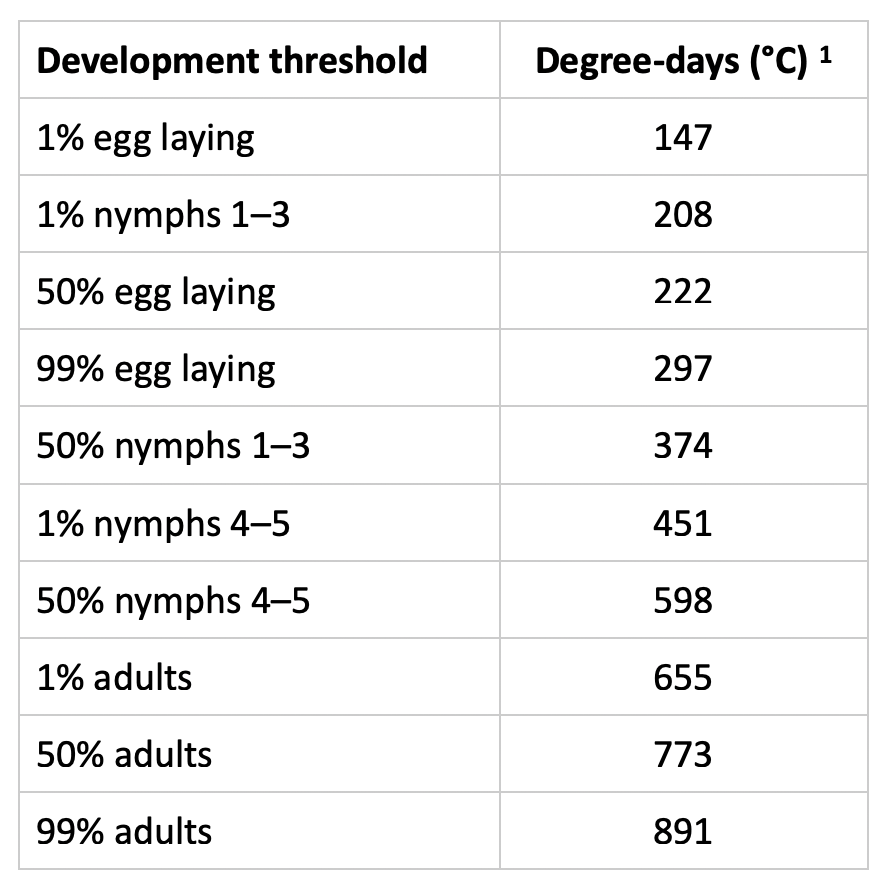 It was then possible to determine the date on which each of these stages is reached under current climate conditions. Subsequently, this model was subjected to various future climate scenarios of cumulative DDs (Tbase = 14 °C) in order to estimate the impact that climate change will have on the range of the brown marmorated stink bug and the periods during which crops will be vulnerable in Quebec.

The maps below show the current (based on the 1981–2010 baseline period) and future establishment potentials under different low and high climate warming scenarios for the 2041–2070 period.

Figure 2. Average dates of peak occurrence of the first generation of adult brown marmorated stink bugs based on the 1981–2010 period 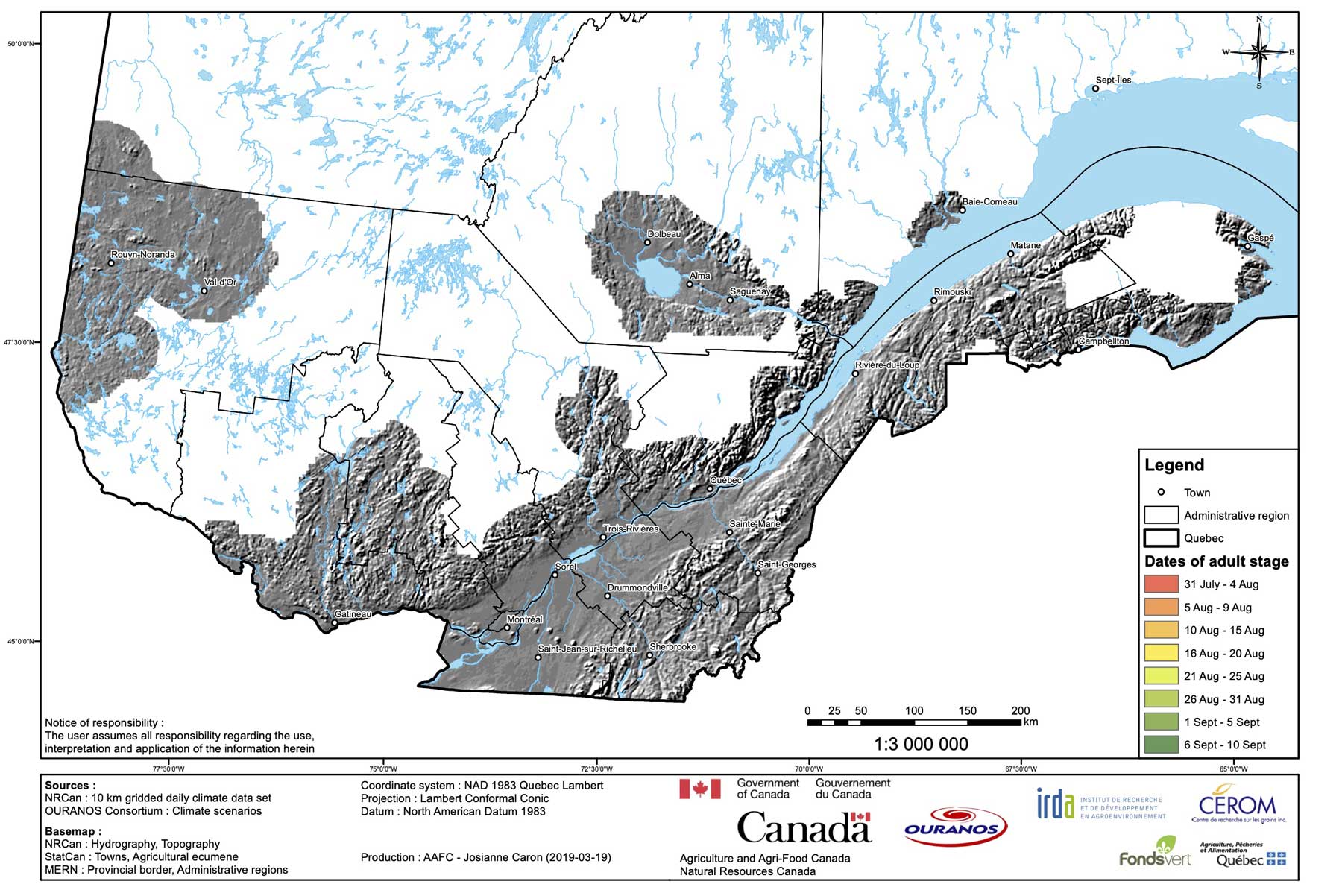 Considering the thermal needs of the brown marmorated stink bug, it appears that this species has not found the necessary conditions in recent decades to complete its cycle in Quebec (Fig. 2). The presence of adults captured in Quebec during this period can be explained by the involuntary introduction of specimens by road transportation routes and by the movement of merchandise from regions further south. 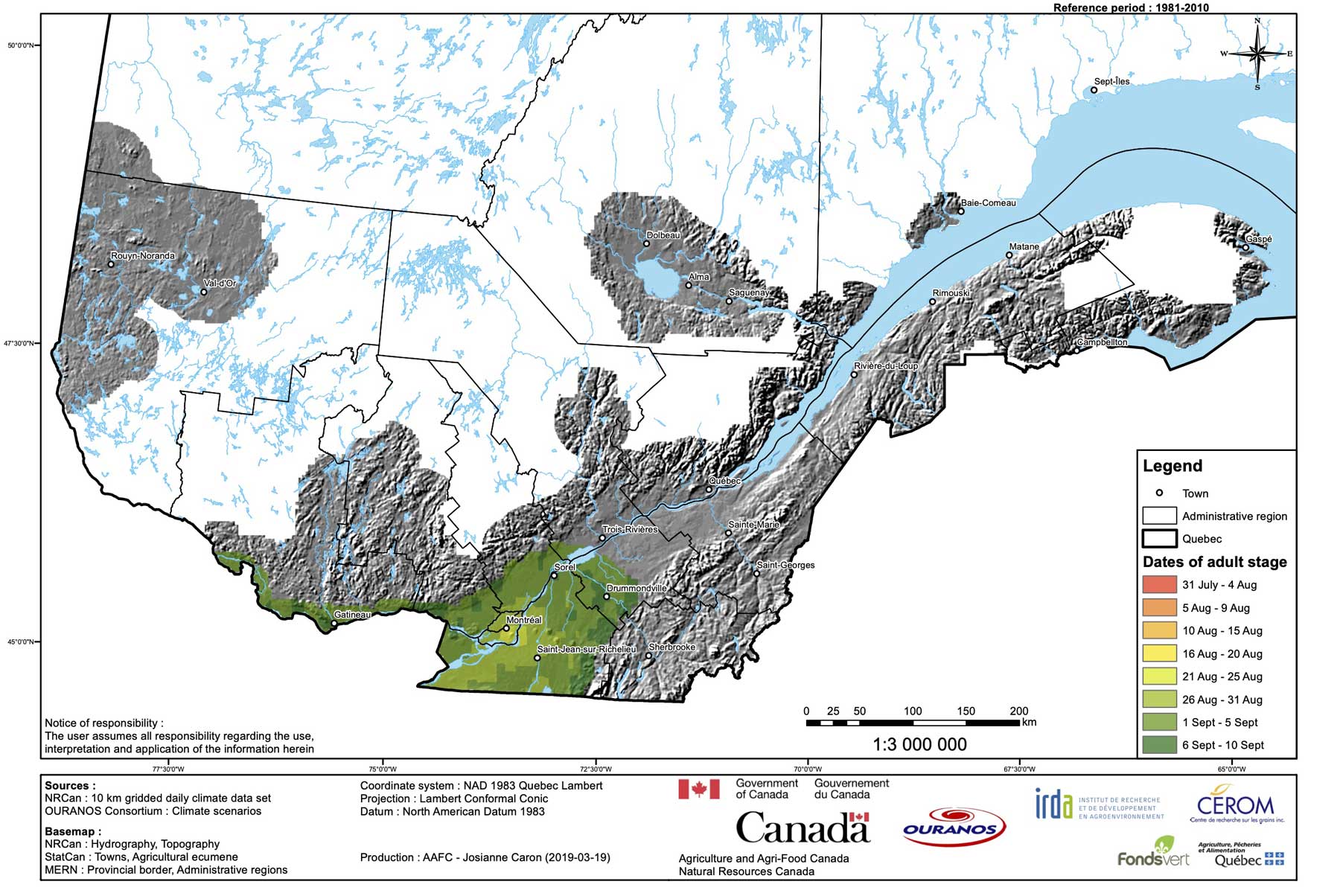 Under a low change scenario, the peak occurrence of adult brown marmorated stink bugs would be between August 21 (in Montreal) and September 10 (Fig. 3). 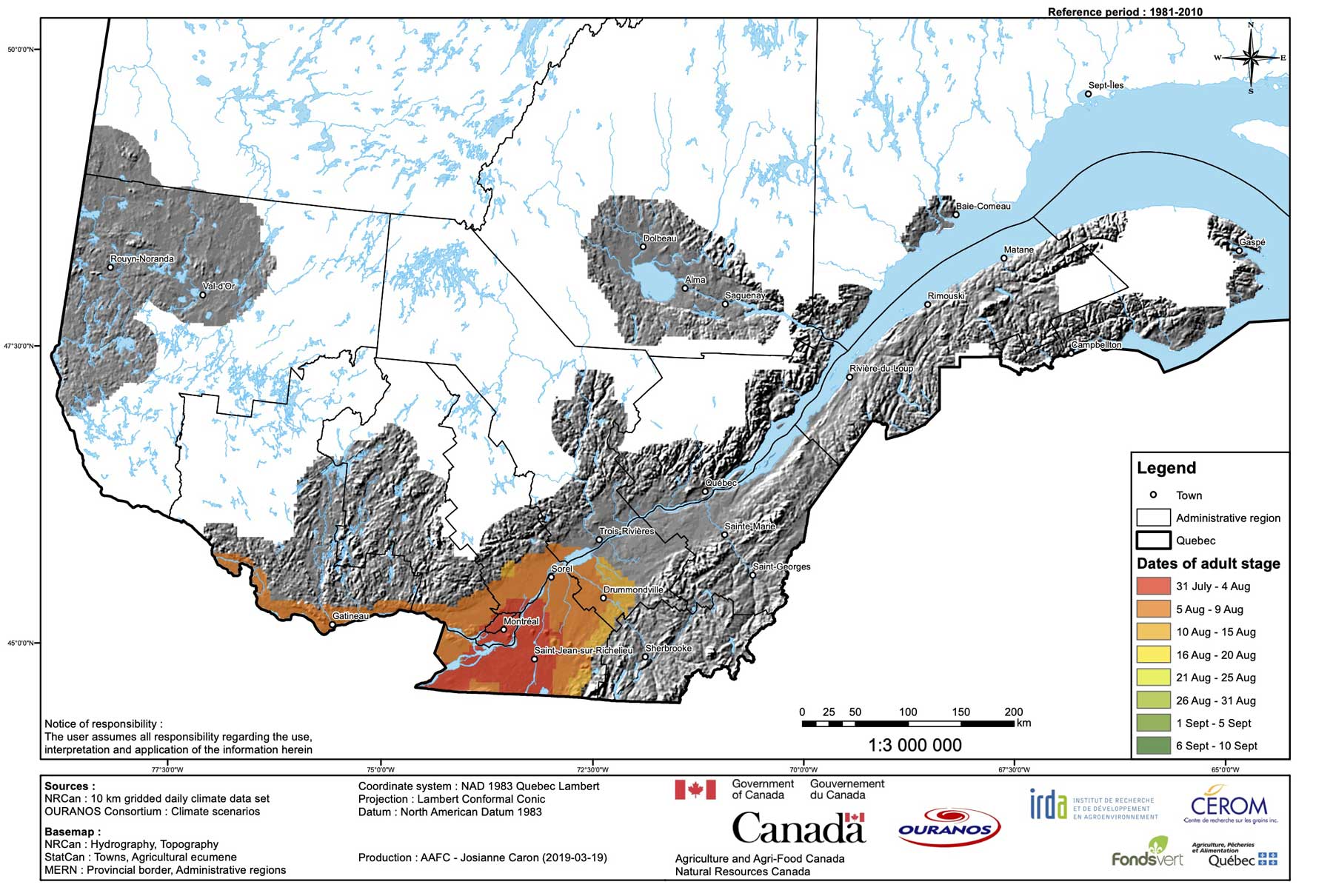 Under a high change scenario, the adult range would be the same as that observed under a low change scenario, but the average date of peak occurrence of adult brown marmorated stink bugs would be approximately 3 weeks earlier, i.e. from July 31 in the Montreal region and in Montérégie (Fig. 4).

Farmers can adapt to effectively control the introduction and spread of certain insects and diseases that will undoubtedly result from future climate change. Biomonitoring is the first step. Thus, scouting networks are of great importance in monitoring crop pests, and monitoring methods will need to be modernized with better networking and better monitoring of what is happening in neighboring provinces and states. We need to be able to react quickly if we want to limit the progression of pests and protect crops. This can be achieved with tools including good knowledge of these new plant pests from the perspective of both their biology and of control methods. Citizen science tools, such as web and digital applications, will also be good allies in monitoring the progression of the range of invasive alien species such as the brown marmorated stink bug.

In the context of phytoprotection, it will be important to find control methods that are safe for the environment and for health. Strategies that can be studied and used include the use of traps for the mass capture of insects, as is done for other species (flies, wasps, Japanese beetles), the use of different physical protection methods such as exclusion netting, the use of various other cultivation methods (trap crops to attract bugs to a particular site away from the target crop, protectant), the use of new varieties and the development of technologies that will make it possible to create more resistant varieties.