Drought and Human Health in Canada

Droughts can impact human health and well-being in a many ways and are expected to increase in Canada across the southern Prairies and for the British Columbia interior under climate change. Other areas may also experience drought conditions. Understanding how drought is expected to change can help public health officials and their partners prepare for and take steps to minimize the direct and indirect health impacts.

Drought is a shortage of precipitation that lasts for an extended period of time; the lack of available water can negatively impact people, ecosystems, industry and sectors such as agriculture.1,2 Droughts can last several weeks, or extend to several years and often lack a clear start and end, making them different from other climate hazards.1,3,4 While the focus is often on a lack of precipitation in the spring and summer growing season, droughts can occur in any season. Droughts also vary in their geographic range and can impact very small to very large areas.1,3,4

Global temperatures are projected to increase because of climate change.  As a result of this increase there will be greater evapotranspiration leading to a greater risk of drought3,5. This can occur even where precipitation increases, as it may under climate change, because the effects of greater precipitation could be outweighed by the increases in temperature.6 Despite uncertainty around estimates of potential evapotranspiration, there is medium confidence , that by the end of the 21st century, droughts will  increase in frequency and intensity in the southern Canadian Prairies and interior British Columbia during the summer, under high emission scenarios.3,5  Similarly, under high greenhouse gas emissions (RCP8.5), projected increases in summer drying and in winter precipitation may lead to moderate annual water deficits in other parts of Canada (e.g. Yellowknife, Northwest Territories; Guelph, Ontario) towards the end of the century.6

ClimateData.ca can be used to explore how SPEI may change in the future at the seasonal (SPEI 3-months) or annual (SPEI 12-months) time scales in response to low, moderate and high greenhouse gas emissions scenarios (RCPs 2.6, 4.5 and 8.5, respectively). Figure 1 illustrates projections of SPEI for Saskatoon (SK).

Drought can affect environmental services and socioeconomic pathways, which can result in negative health impacts (Figure 2).

Figure 2. Pathways through which drought impacts human health in the context of climate change.8 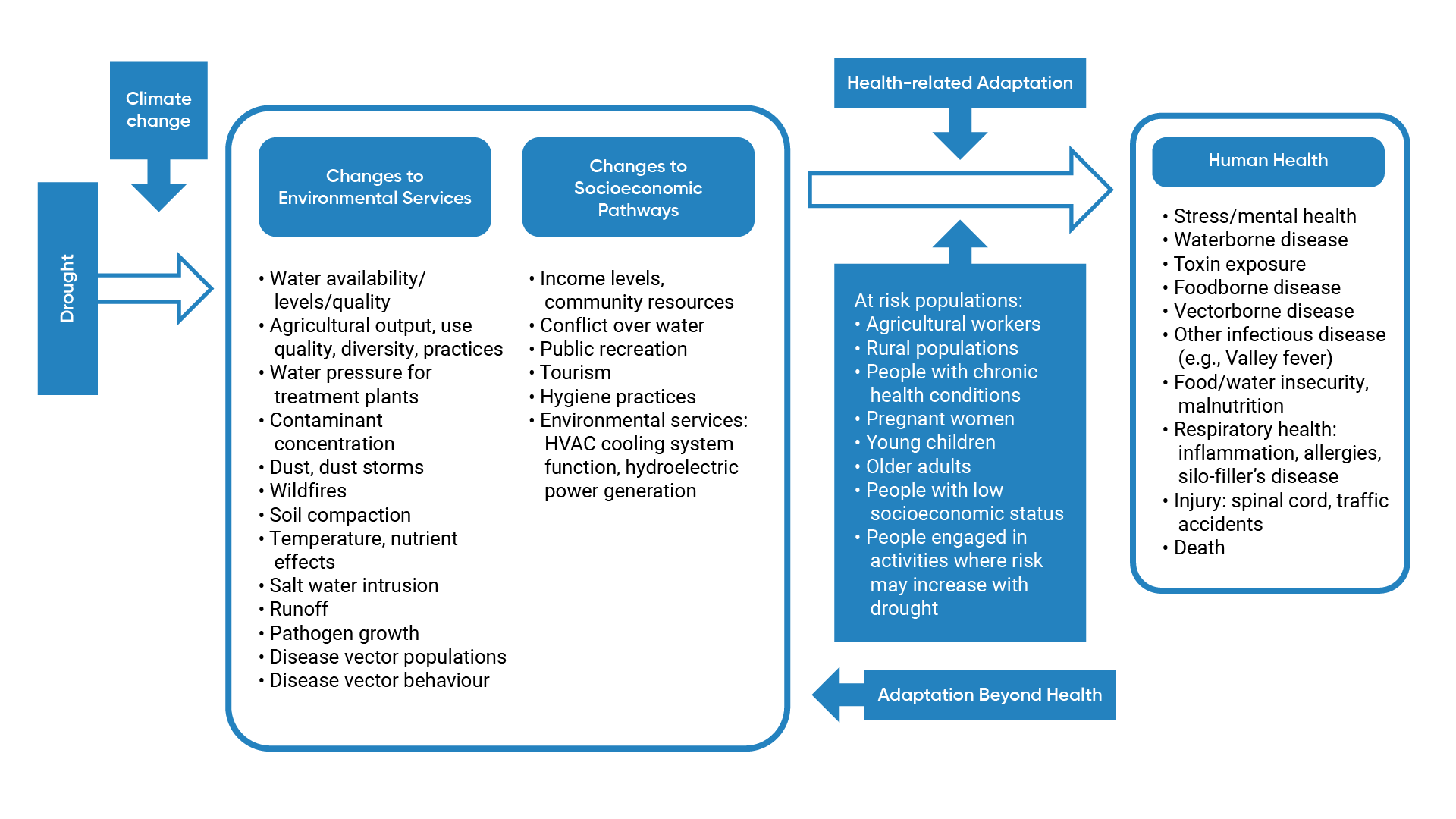 Potential drought-related health impacts relevant to Canada are wide-ranging.8,9,10 For example, drought can lead to increased health risks as a result of changes in water volume, levels, flow, and/or temperature, which in turn can increase the concentration of contaminants and pathogens in sources of drinking and recreational water.8 Warmer temperatures can also lead to harmful algal blooms in lakes and rivers. In addition to the consumption of contaminated water being dangerous for humans and often fatal for animals (e.g., dogs and livestock), some of these algal species can generate toxins in the form of aerosols which are also harmful to human and animal health.11 Drought also results in respiratory impacts since dust from dry soils can irritate bronchial airways and lungs and exacerbate conditions such as asthma. Drought followed by an extreme rainfall event can also increase the risk of food/water-borne illness (e.g. campylobacteriosis).12,13 The ground can become compacted during a drought and enhance runoff that follows from a subsequent extreme rainfall event, increasing the risk of water contamination.12 There can also be risks related to finding alternative drinking water sources. For example in Nova Scotia, the consumption of water from a well that was improperly refilled after running dry due to drought was associated with 93 cases of gastrointestinal illness.14 Impacts can be specific to a region or population. For example, in coastal areas, existing fresh groundwater supplies can be contaminated by saltwater intrusion during dry periods.15

Drought can lead to economic impacts, particularly for farm families or others whose livelihoods depend on water or rainfall, which has been associated with mental health impacts such as an increased risk of suicide16, depression and anxiety.17 Some indirect impacts can reach far beyond the boundaries of the region affected by drought. For example, drought has been associated with wildfires9 and smoke from wildfires can impact populations over a very large area.18 Exposure to wildfire smoke has been consistently associated with respiratory health impacts.19

A better understanding of vulnerability to the health impacts of climate change can help ensure that policies and programs developed to protect populations are effective.20 Vulnerability to drought health impacts is a function of exposure to these hazards, physiological sensitivity of specific populations and the adaptive capacity of individuals, communities and health systems to take protective actions.21,22 Note that as part of its overall vulnerability, a region where drought has occurred more frequently may have greater capacity to adapt to the event than a region where drought has been relatively rare. Regions more experienced with drought, therefore, may have a lower overall vulnerability to drought-related health impacts, even if the exposure to drought is greater.

In efforts to assess vulnerability to climate change impacts on health, for example by partners in Canada’s HealthADAPT initiative, public health officials can use meteorological information and climate scenarios to understand current impacts of drought events and how exposures may increase due to climate change. Additional drought health vulnerability indicators are also available.23 Guidance for undertaking such assessments using climate information is available to public health officials in Canada20,24 and Health Canada has launched a HealthADAPT community of practice to share learnings and experiences among partners.

Public health adaptation strategies and those in health relevant sectors have been implemented in Canada that can reduce drought-related health impacts in the context of climate change. Many of these measures were not developed with the goal of reducing climate change impacts associated with drought in the first instance. Examples include programs for monitoring surface water25 and air quality,26 a phone line to help reduce the psychosocial impacts of drought on farmers,27 and education to reduce spinal cord injuries related to diving in shallow water.28 There have also been more novel adaptations such as the Invitational Drought Tournament (IDT) that was developed by Agriculture and Agri-Food Canada.29 The IDT presented a simulated drought scenario for one Prairie watershed and one sub-watershed in British Columbia to support planning for drought among a range of participants.29 More evidence is needed regarding the effectiveness of many drought adaptation strategies that reduce health impacts;8 activities such as monitoring and surveillance can help public health officials understand the degree to which the measures are effective and whether any modifications might be needed.