Adapting to a changing climate requires confronting and dealing effectively with a wide range of uncertainties. Learn about the three main sources of uncertainty in climate projections.

Why should I consider uncertainty?

Making a conscious effort to understand uncertainties associated with climate projections leads to:

Conversely, neglecting to consider uncertainties can:

What are the sources of uncertainty?

There are three main sources of uncertainty in climate projections:

Natural internal climate variability: Our climate is influenced by important unpredictable natural fluctuations that occur even without any change in greenhouse gas concentrations. Climate variability is due in part to semi-cyclical phenomena such as El Niño and North Atlantic Oscillation. This type of variability has and will always be part of Earth’s climate system and therefore scientists have represented this type of variability in climate models to the best of their ability. However, there are other determinants of climate variability that are external to the climate system, e.g., volcanic activity and changes to solar output. As these are largely unpredictable, they are not included in simulations of future climate but are present in simulations of historical climate since we have measurements of their occurrence and impact on the climate system during this period.

Model uncertainty: Numerous climate models exist and all have been developed following basic laws of physics. While they are sophisticated tools, these models continue to evolve as our understanding of the climate system improves and technology advances. As such, models remain imperfect tools, and model simulations of the climate can differ from reality and may react slightly differently to changes in forcings. Indeed, individual climate models differ in a number of aspects, such as the level of simplification, the grid size and the way in which they represent physical phenomena, particularly those that are too small to be explicitly simulated (e.g. clouds, surface atmosphere exchanges and the representation of soil and vegetation cover). Each model is unique and will generate slightly different projections, this is true even when they are run using identical greenhouse gas emissions scenarios. To help address this type of uncertainty, ensembles, or sets of climate models are often used to see where they agree and show the range of possible futures, to help with climate change preparedness.

Emissions scenario uncertainty: The evolution of greenhouse gas emissions is also uncertain and it is not possible at this time to determine exactly what future emissions will be. Consequently, models are run with different trajectories of emissions, known as Representative Concentration Pathways or RCPs, which are based on a set of assumptions about driving forces, such as technological change, demographic and socioeconomic development, land-use, and their key interactions. RCPs provide alternative visions of how the future may unfold and therefore influence the results of climate projections. Whether we move towards a cleaner, healthier environment and economy is in the hands of Canadians and other countries around the world.

The relative importance of the three sources of uncertainty changes depending on the geographic scale at which the model output is examined (over the whole globe or a continent for example), on the particular climate variable considered (e.g., temperature, precipitation, or other variables), and on the planning horizon and on the temporal scale of the variable of interest (yearly, seasonal or monthly for example). For instance, natural internal variability is particularly important over smaller regions and shorter time scales, and for projections of precipitation. Relative importance can also vary depending on the models and emissions scenarios used.  The context in which these types of analyses are conducted must therefore be considered.

The image below (from the Intergovernmental Panel on Climate Change’s Fifth Assessment Report) shows the relative importance of the three different sources of uncertainty in climate projections for global mean temperature depicting how the importance of each source of uncertainty grows or shrinks over time out until the end of this century.

The plumes of different colours (orange, blue and green) represent the contribution of the different sources of uncertainty to the total variation in decadal global mean temperature. 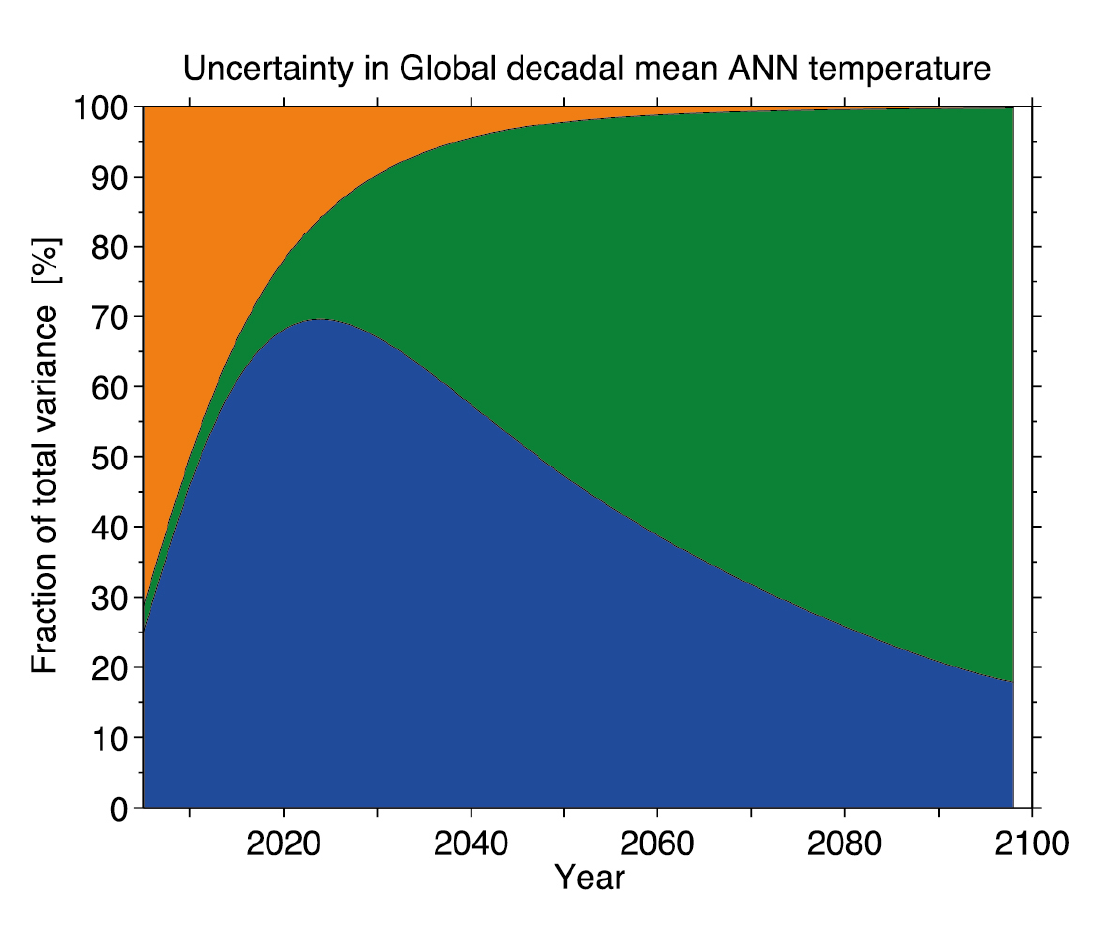 What does this mean for decision-making? This suggests that over the short-term, past weather events and historical climate data may contribute important information to the decision-making process.

What does this mean for decision-making? Decisions about climate adaptation over the first half of the century should consider the range of results from multiple climate models.

What does this mean for decision-making? Up until 2050, the temperature projections from climate models are generally similar, regardless of emissions scenario (high, medium or low). Decisions related to climate change planning for mid- to later half of the century must consider an ensemble of models and multiple emissions scenarios, particularly for the later part of the century.

In this example of seasonal precipitation projections for western Canada using multiple RCPs and an ensemble of global climate models (source: https://doi.org/10.1002/joc.6079), we see that natural internal variability (orange) is generally more important over time than the combined contributions of model (blue) and scenario (green) uncertainty. Natural internal variability can be particularly important over smaller regions, shorter temporal scales (in this case seasons), and over longer planning horizons (e.g., out to the end of the century).

What does this mean for decision-making? For precipitation over finer spatial and shorter time scales, natural internal variability remains extremely important until at least the end of the century. While decision-makers should consider multiple climate models and emissions scenarios, they should be aware that natural internal variability is still the dominant uncertainty in precipitation projections. 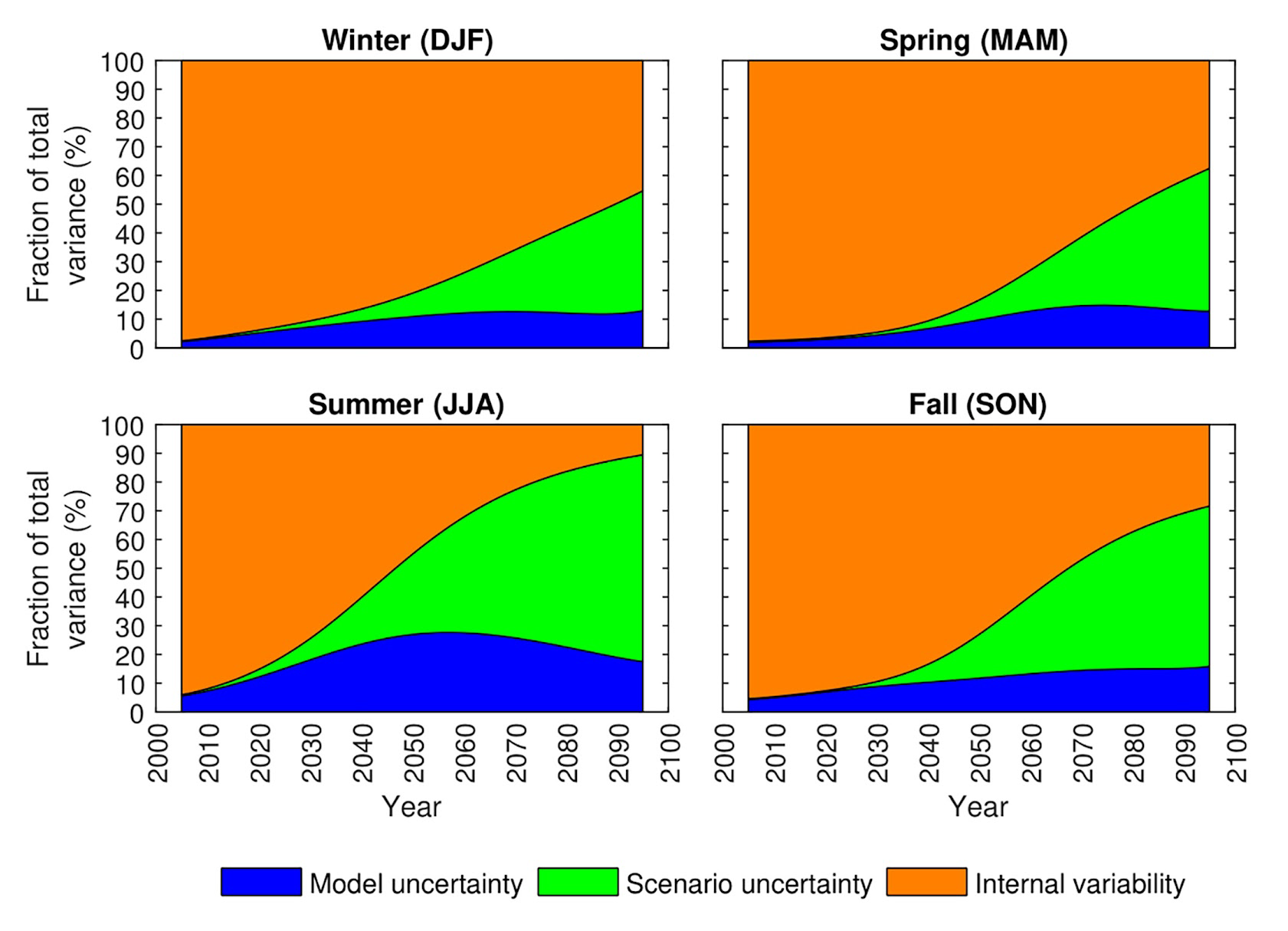 ClimateData.ca enables managing these three sources of uncertainty by:

Beyond the built in measures on ClimateData.ca that help users manage uncertainties, there are different approaches that enable the consideration of climate projection uncertainty in the adaptation decision-making process. These may include:

Scenario planning – Involves the consideration of multiple outcomes. A key element is to identify a number of different possible solutions that do not confine the results to only one end point, but rather leave many options open. Decisions can then be made by comparing how well each solution would perform under different future conditions. Critical milestones can be used to reassess the adaptation measures in light of the best available science, and adjustments to adaption plans made as required.

Adaptive management – Involves finding solutions that can be re-evaluated and adjusted as new knowledge about both climatic and non-climatic variables becomes available. Learning and monitoring are an important part of the process.

Implement robust, low-regret strategies – Involves seeking solutions and strategies that would work reasonably well under a range of plausible futures.