Learn about the latest set of emissions scenarios, based on Shared Socio-economic Pathways (SSPs). Understand how SSPs differ from RCP scenarios and learn about key considerations when using SSPs in climate risk assessments.

Engineers, planners, and decision-makers across the country are increasingly using climate model information to understand and adapt to the heightened risks of climate change, as historical observations alone are not suitable to assess future climate-related risks. Practitioners using future climate data want to know how much climate change, and thus how much future climate risk they should expect to encounter in the coming decades or at the end of the century. Unfortunately, determining how much the climate will change in the future strongly depends on how society grows and develops, metrics that are influenced by a host of factors, including global cooperation on greenhouse gas reductions, political will, and technological advancements. Therefore, rather than offer practitioners a single set of future climate data, it is best practice to provide a range of future climate change scenarios that encompass various levels of greenhouse gas emissions. It is important to know about these scenarios – how they are defined and the key differences between them – prior to using future climate data.

Today, the scenarios used to characterize possible future development pathways for human societies are known as Shared Socio-economic Pathways, or SSPs for short. SSPs were developed for use with complex Integrated Assessment Models. These models make assumptions of how population, education, energy use, technology – and more – may change over the next century, and couple them with assumptions about the level of ambition for mitigating climate change. Together, socio-economic factors and mitigation ambitions are translated into scenarios of greenhouse gas emissions (and associated atmospheric concentrations). The climate change projections that result under these scenarios describe a range of plausible future climates, from a pessimistic high-carbon scenario to a low-carbon scenario that meets the ambitions of the 2015 Paris Agreement.

The goal of this article is to introduce the SSPs, explain their similarities and differences to the previously used Representative Concentration Pathways (RCPs), and provide guidance to practitioners on how to use scenarios that meet their needs when extracting future climate data from ClimateData.ca and applying it in a risk-based decision-making process.

As mentioned above, the availability of climate projections for multiple Shared Socio-economic Pathways (SSPs) allows practitioners who work with future climate data to explore climate changes across a range of very different futures. SSPs are critical to climate adaptation and policy work for two main reasons.

First, these pathways describe possible socio-economic conditions, land-use changes, and other human-caused climate drivers that influence greenhouse gas emissions, thus affecting Radiative Forcing. Radiative Forcing describes the amount of excess energy trapped within the Earth’s climate system due to the variation of a climate change factor such as GHG concentrations.

Second, the SSPs describe socio-economic characteristics that influence greenhouse gas emissions (and subsequently, Radiative Forcing) in a standardized manner, giving an indication of the societal pathways associated with different levels of warming. Further, potential mitigation actions can be “applied” within these baseline socio-economic scenarios to evaluate their effectiveness in achieving various targets, such as having a “good chance” of meeting the commitments of the Paris Agreement by limiting global temperature rise to well below 2°C above pre-industrial levels (SSP1-1.9).

SSP-based scenarios were used in the most recent set of climate model experiments, known as the Sixth Phase of the Coupled Model Intercomparison Project, or CMIP6 for short. Results from these climate model experiments provided a foundation for the assessment of past and future climate change in the Intergovernmental Panel on Climate Change’s (IPCC) Sixth Assessment Report (AR6). 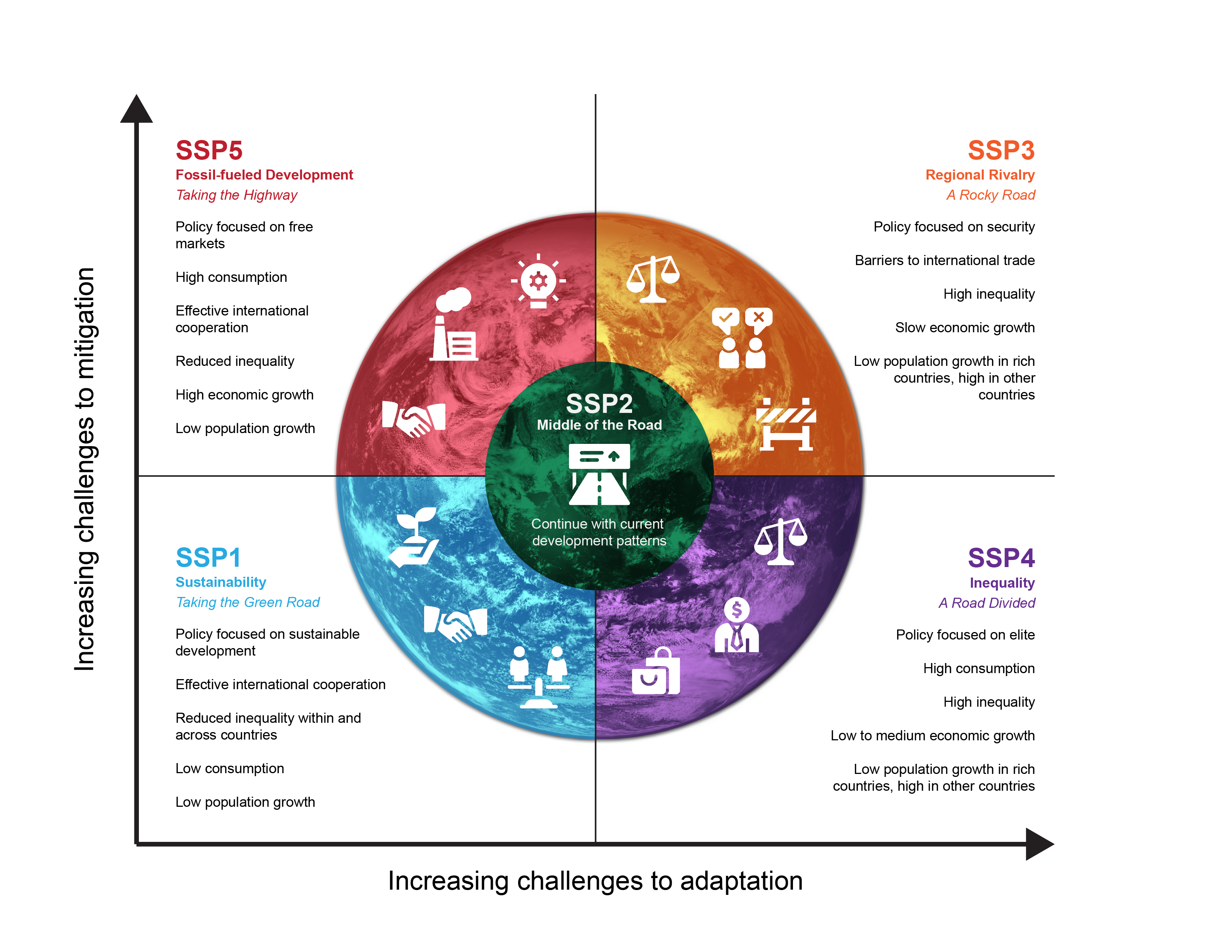 What are the differences between SSPs and RCPs?

SSP based scenarios further refine the previous greenhouse gas concentration scenarios known as Representative Concentration Pathways or RCPs. RCPs were explicitly designed for the climate modelling community to explore the effects of different emissions trajectories or emissions concentrations (resulting in various Radiative Forcing values). The socio-economic characteristics used to define RCPs are not standardized, making it difficult to map societal changes like population, education, and government policies to climate targets, such as keeping global warming well below 2°C. SSPs address this by defining how societal choices can lead to changes in Radiative Forcing by the end of the century. As such, SSPs expand on RCPs to allow for a standardized comparison of society’s choices and their resulting levels of climate change.

The sequence of information used to project future levels of climate change.

In the literature, practitioners will see SSP based scenarios labelled using a format such as “SSP5-8.5”. As previously discussed, “SSP5” reflects the Shared Socio-economic Pathway representing a fossil fuel intensive world – in this case, in a world dominated by mitigation challenges. Meanwhile, the “8.5” describes 8.5 Watts per square meter of Radiative Forcing resulting from the greenhouse gas emissions in this scenario.

Within a single SSP “family” there can be multiple emissions scenarios that lead to different levels of Radiative Forcing.  This is because different assumptions about ambitions to mitigate climate change can result in differing emissions within the same general socio-economic narrative. For example, SSP1-1.9 and SSP1-2.6 both stem from the same socio-economic family of scenarios, SSP1 (Sustainability: Taking the Green Road). However, these scenarios have different emissions, resulting in different Radiative Forcing values (1.9 vs 2.6) due to the mitigation actions that were applied. 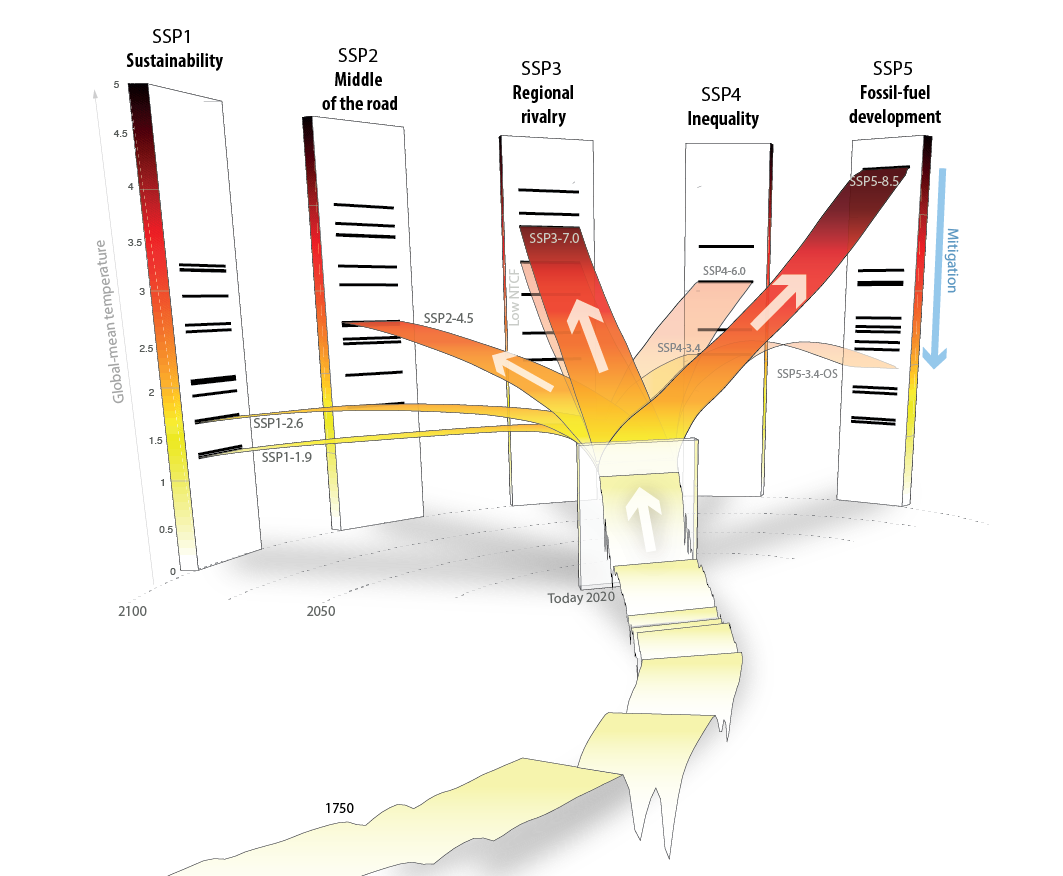 Finally, the new set of SSPs gave the global climate modelling community a chance to evaluate whether the previous emissions scenarios were still relevant, given that almost two decades have elapsed since they were conceived. One important development was the introduction of SSP1-1.9. This scenario describes a socio-economic pathway that enables society to reach the 2015 Paris Agreement target of keeping global warming well below 2°C (and pursuing efforts to limit warming  to 1.5°C), compared to pre-industrial levels.

Which SSPs will be on ClimateData.ca?

ClimateData.ca will host projections based on three scenarios (SSP1-2.6, SSP2-4.5, and SSP5-8.5), highlighted below. These were chosen because they span a wide range of possible future climates, have associated projections available from many different climate models, and have levels of Radiative Forcing that correspond with the three RCPs (high or RCP8.5, medium or RCP4.5 and low or RCP2.6) currently used on ClimateData.ca. 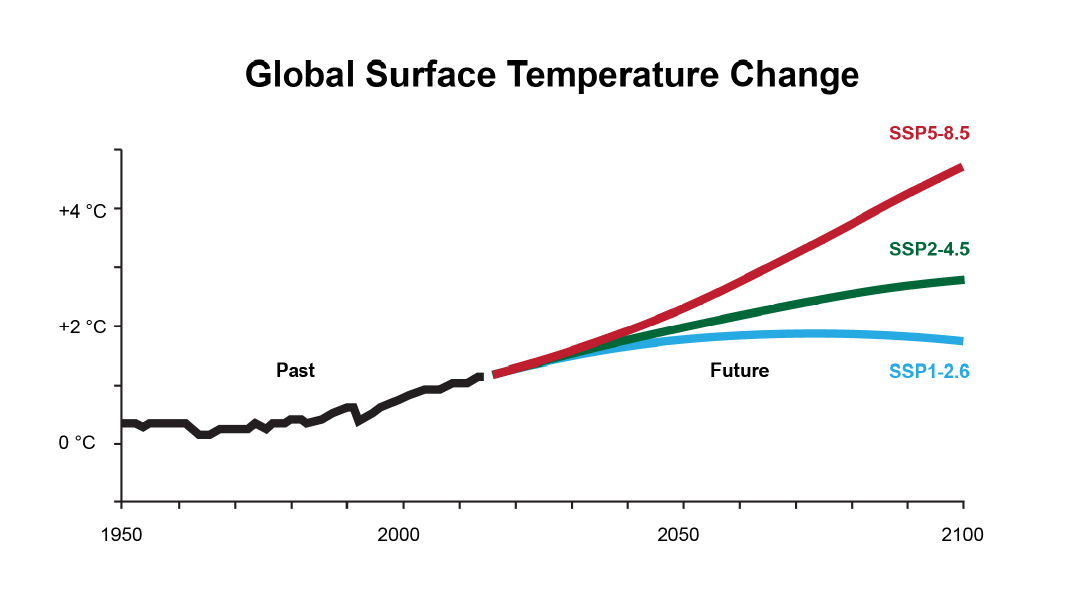 A depiction of global surface temperature changes (relative to pre-industrial levels) under the three SSP based emissions scenarios that will be found on ClimateData.ca. Note that the uncertainties associated with each projection are not depicted.

There are slight differences in the global average temperature changes associated with RCPs and SSPs of comparative Radiative Forcing values. These changes result from a slightly different mix of greenhouse gases in the SSP emissions pathways, and from the use of more recent climate models than those used with the RCPs.

Which SSPs do I use?

Every practitioner using future climate data will have to answer the question, “which SSPs should I consider?”  To do so, the practitioner will first need to answer two additional questions: First, what components of my project are vulnerable to climate change? Second, what level of risk am I comfortable taking?

In some situations, for example, when considering a major highway, the consequences of closure due to a one-in-100-year flood or another rare but damaging environmental hazard can be very high, affecting local food security, national GDP, and public safety. Therefore, if tasked with planning to protect this highway from future climate threats, the costs of adapting to SSP5-8.5 (the “high carbon” scenario) up to the end of the century may be considered worthwhile. However, in other circumstances, where the consequences are lower and/or the likelihood of damaging events is low, adapting to SSP5-8.5 may not be necessary or economically viable. Regardless of the project and the rationale, the question of “how much risk am I comfortable taking” is complex, undoubtedly requiring conversations with diverse partners and stakeholder groups to understand the broad range of potential impacts and implications.

A project’s planning horizon is another important consideration during this process. Over relatively short periods (i.e., the next decade), the range of projected climate change between different SSPs is small. This means that it matters less which SSPs are considered, and more that any of them are used, rather than relying solely on historical data. However, after the middle of the century, the scenarios quickly diverge, revealing a wide range in potential impacts of climate change.

In applications not directly related to adaptation, where determining vulnerability and risk is not an important project component, the SSP selection process may consider additional factors. For example, SSP5-8.5 projects the most global warming making the climate change signal most easily identifiable from the background noise of natural climate variability. In research applications, where the goal is to find a correlation between climate change and some other event, SSP5-8.5 might be the best pick as the climate signal is strongest under this emissions scenario.

The complex nature of the climate system, climate models, and human factors makes it challenging to determine exactly how the climate will change.

What is known for certain is that the future climate will be different from the past and present. While action to mitigate climate change is essential, regardless of these decisions a certain amount of warming is already ‘locked-in’. By assessing more than one possible future, planners and decision-makers can better prepare for a range of possible outcomes.